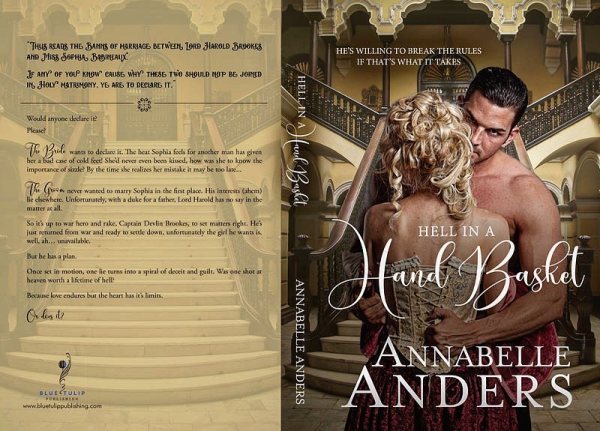 I was blessed with an ARC of Ander’s book, Hell In A Hand Basket, in exchange for an honest review.

From the author of Hell Hath No Fury… I was expecting a good read but one that might not be as ‘good’ as her debut book. Well, no fear, this author is going on as she started.

Hell In A Hand Basket also draws you in quickly and firmly to the characters, including the foils, the friends, the ones not as central to the plot because each one has a role to play and is a fleshed out person in their own right.

There is a scene that left my emotions raw and my eyes leaking. An author that can evoke tears of joy or sorrow has done a job few even try to attempt.

Now, I understand from covert rumblings there are more stories already in progress and while I may reserve judgment until those too are read, my fear that they will be less than Anders’ debut is no longer a worry.

This writer seems to have fallen into her genre and is leading her readers on one merry romp after another.  Truly an emotional ride to an eternal love.

Annabelle and I met on Facebook and immediately fell into an easy kinship discussing writing, books, and favorite authors. She recommended her hero, Mary Balogh when we were discussing means on doing the ‘dirty’ on a villain.  I mentioned a method, yet not killing, and she counted with, “That is very much like an ending to a Mary Balogh book. Do you read her?”

I was happy to say, “No, but I will.”  I’m now blitzing through all of Balogh’s books and have to agree, Annabelle’s judgment is sound.

And, Annabelle’s writing is delightful and well worth reading.

via Rumba in Em

via A Fork in the Road

I first met Catherine Mann through her writing and my reading. She is a Rita Award writer so knowing and expecting her writing to be above the cut is a given.  Her latest book, The Baby Claim is set in Alaska.

It has been awhile since I read one of Mann’s books but her smooth transition into a world of high flying but yet down to earth characters are met head on where even the sensualness of the nap of rug draws you into the twists of plot quickly.

This book is a new series, where only the Alaskan Tundra is frozen.  Broderick and Glenna must try to rekindle a love lost for the sake of more than themselves. Giving away the plot is never found in my reviews.  You must experience the journey through her writing.  It is for pre-sale now at this link- The Baby Claim 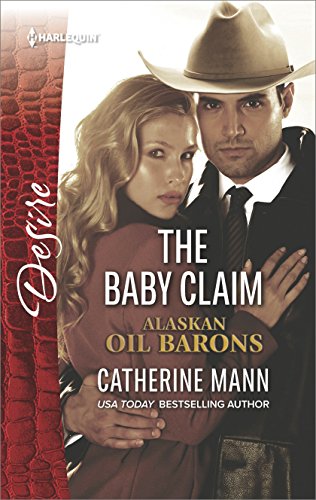 The second time I met Cathine Mann was on Facebook and for all our complaints of Facebook’s algorithms, spying as does Google, Facebook does give us the opportunity to connect with people that have like interests.

I connected because she is an animal advocate.  I did not realize immediately she was one of the authors I enjoyed reading.

Coupled with that and a habit of never leaving home without at least two books to read when the chance dictates, Cathy’s book was one in hand and half-finished by Christmas day.

I spent Christmas day with my youngest son and family.  Normally I am at home with my furry rescued animals and having their routine disrupted made for an over joyous reunion.

The four dogs, two large – a Pitt Terrier and a Lab/Pitt mix – jumped on me, pinning me to the sink as they washed my face, hands, any skin available, while the two ‘ankle-biter’ sized pups: a Cock-a-Poo and a Beagle/Dachshund entangled my legs hugging me tightly.  It was their rendition of, ” Thank God you’re alive!  We thought surely you were dead!”  Amidst this reunion, my purse was knocked to the floor and The Baby Claim book was sent spiraling towards the dining area.

I did retrieve The Baby Claim and put it in a safe place, not to be found until several days ago – well into the new year. I am happy to say the review above is submitted because I did finish the read. 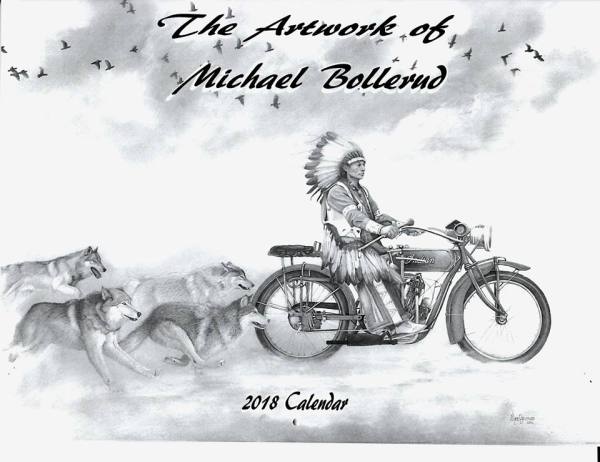 I still have just a few calendars available for sale. $25 (free shipping in the US) and they have been signed. If you are interested, send me a message in messenger for more details. Thanks, Everyone and have a Great day! 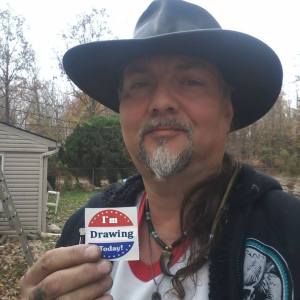 I was drawn (no pun intended) to Mike when he first posted sketches of Native American nature, wildlife, and historical NA figures.  The first portrait I had to have, I saved and bought a print and as I was able to buy more, I found out he does commission work as well.

I was fortunate to have him do a portrait of my husband and me for our 50th Anniversary which now hangs in my computer room.

It first graced the wall of my husband’s room in rehab and was a source of comfort to him when I was not with him. It is now a touchstone for me since Paul went to Glory early last year.

The year 2017, in our household alone, death has hovered as in the tale of Job, picking, and choosing, wanting five but settling for…

2017 will be remembered as a year of profound losses

In January death took a younger brother in law as he slept: in February a friend as close as family; in March death visited our household but they were at a hotel enjoying a weekend jaunt – death persisted and took Nana as people were awakening.  In April, death said I am not done and took away my love. In May death said I know you are heartbroken, aged Dalmatian, so to Shadow, he beckoned and took him to his master.

Oh, one more or maybe two, but for now it is June and the bunny named Brownie is found peacefully in eternal sleep with morning rays illuminating the body, gender unknown but cherished and mourned.

On the morning of June 23, my youngest daughter in law awakens my son to tell him, “Take me to the  hospital.”  She either has a massive acid reflux or a heart attack.  After tests at the local hospital, she is transferred to a larger facility with a cardiac wing.  Three of her arteries are plugged and she is scheduled for heart surgery.  She is too ill to have more than one, although she needs three, she has the widowmaker stent put in.

While in the hospital she decides stress of the year’s woes may be a contributing factor, her health and eating habits need and will immediately undergo a change.  She once was a pre but now being diagnosed with a full type II diabetes she is put on medication including shots of insulin. She re-evaluates her life and makes changes ensuring she will be welcoming in 2018 on this earthly plain.

In November, on Thanksgiving day, a niece in her early thirties, a mother of three, never makes it to her mother’s table to celebrate. On the road to a small village in the foothills of the Adirondack Mountains, on a curve, she hits black ice and spins off into a telephone pole. Had it been the surrounding trees she might be in a painful recovery, but the unbending pole snapped, flipped the car and pinned her as her butterfly spirit soared back to be accepted from whence she came.

In my late thirties I had a massive but unconventional stroke accompanied by an NDE, that is, caught in the net of the death of the body, yet released because the lifeline laid out before is not yet accomplished. I was one of the lucky or unlucky ones, depending upon how you look upon life on earth. When I reached the portal of returning home, I was not allowed even though I wanted to stay, to not return to my earthly body weight; but, once again returned, I learned to appreciate that gift and mold the wasted years into a tapestry of thanksgiving and love.

As I look to 2018 heart aching as I now walk alone, the awe and the thanksgivings and even the love that has gone on, the love in my heart accompanies me as I stutter, even at times shudder, knowing my life’s task is not yet complete.